As a young, impressionable librarian, recently graduated with my MLS degree, I went to work in a public library in a medium-sized Midwestern city, where I did the usual reference tasks common in the 1970s. I was fascinated by the rich variety of interests and passions that motivated patrons to not only visit the library but actually come to the desk and ask for help (how often does that happen these days?). Among the subjects and authors that people were looking for, two names often popped up in requests: “Where’s Barbara Cartland?” and “Why aren’t there any V. C. Andrews books on the shelf?”

I gracefully step aside from discussion of Cartland’s bodice rippers and ask you to focus your attention on today’s topic: shreddings of the heart, which is what Andrews penned. Stir together themes of vulnerable children tormented by neglect, rape, incest, greed, death, or betrayal by a family member, sprinkle in ghastly gothic overtones, skillfully fold in some personal tragedy, and top it all off with the workings of a vivid imagination, and it is no wonder that readers of V. C. Andrews’ five-book “Dollanganger” series identified with the characters and felt as if their hearts had been ripped apart with each new installment. 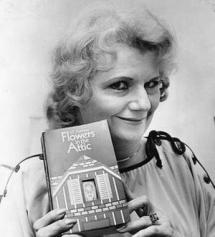 Who was this V. C. Andrews who attracted so much interest from readers, especially teenage girls? And whatever became of her? Yes, I know — in simple terms, she died. “What!?” you say, “Dead? But she has a new book coming out this month!” Indeed. That’s part of the story. There is much more to tell, both before and after her passing.

Cleo Virginia Andrews was born on June 6, 1923 to William and Lillian Andrews of Portsmouth, Virginia. After high school, she enrolled in art correspondence courses and then began a successful career as a commercial artist and fashion illustrator. All the while, she felt completely compelled to write, and did so every night after work, at home, where she continued to live with her mother, Lillian, for Cleo’s entire life (for Lillian outlived her).

Unbeknownst to most people, Virginia was crippled and confined to a wheelchair much of her adult life. Two conflicting stories exist about the cause of her condition. One claims she fell down the stairs at school, which caused back injuries. The other, vouched by relatives, says she suffered from severe rheumatoid arthritis. Family members describe her as being in a full-body cast for a time, and having little or no neck movement. Her editor, Ann Patty, said, “Her spine was fused – it didn’t move. From her butt bone to her head, the spine did not move.” Her cousin describes Andrews as standing up at a high desk and typing out her first few novels. Whatever the cause, Andrews lived her life in great, unremitting pain. She suffered in silence, but the pain poured out through pen and paper. Fans of her fiction can be thankful that her hands and mind did not object to constant use.

Andrews was bored by her artistic daytime job. All her imagination and energy went into writing. Several stories and novels were rejected. Then, a magic moment: her pitch letter to a literary agent resulted in “Flowers in The Attic” being bought by Pocket Books with a $7,500 advance. Two weeks after its 1979 paperback publication, it was on the bestseller list. And the rest, as they say, is history.

So how did Cleo Virginia Andrews become V. C.? As one story goes, a printer at Pocket Books reversed her name on the cover and shortened it to initials. Another explanation is that the publisher wanted readers to wonder if the author was a man or a woman. Just think—we could be talking about the famous Cleo Virginia Andrews today! A happy accident, or publisher’s strategy, indeed.

When fame (and fortune) landed in her lap, Andrews avoided publicity. She was quite private and gave few interviews. Indeed, her physical condition was not well known. She kept her focus, day and night, on writing, never caring about health or other matters. According to a relative, Joan Andrews, “She knew she had a lump on her breast, but would not take care of the situation until she finished the current novel she was working on and also the sequel. By then the cancer had begun to spread.” She died of breast cancer on December 19, 1986, just seven years after “Flowers'” first publication and is buried in Olive Branch Cemetery, Portsmouth, Virginia. In a rare interview with Contemporary Authors, she said, “There is no beauty without ugliness, and no enjoyment without suffering; we have to have the shade in order to see the light, and that is all I do in a story, put my characters in the shade–and try before the ending, to have them in the sunlight…. My novels are based on dreams, and situations taken from my own life, in which I change the pattern so that what might have happened actually does happen–and therein lies the tale.”

V.C.’s two brothers and her mother took charge of her estate, and along with their publisher, secretly selected an author to continue the ideas and storylines of her books. It seems that a tax case in the early 1990s between the estate and the IRS resulted in the ghostwriter’s name being publicly revealed. Andrew Neiderman has been the voice of V.C. Andrews’ many bestsellers since finishing up her fifth book, “Garden of Shadows.” His story is fascinating in itself. He was hired by the estate, never met V.C. Andrews, and is a popular fiction writer in his own right, with several novels published. When he began writing as V.C. Andrews, he used two different computers, one for his own work, and one for Andrews’. He has done quite well in imitating her voice, types of characters, and nuances. Contemporary readers maintain the popularity of her novels, with no end in sight. Many seem not to know that Andrews has been gone for more than 30 years.

Neiderman recently signed another contract with Simon & Schuster for an additional four V.C. Andrews titles, after already having done about twenty. “Silhouette Girl” was just released on January 2. “Beneath the Attic,” a prequel to “Flowers in the Attic,” comes out at the end of August, 2019. For those with a fondness for statistics, her 75+ novels have sold more than 100 million copies in 95 countries and have been translated into 25 languages. Not bad, eh?

Nothing brings a smile to Paul Duckworth’s face quite like a good book, a long walk, and the unmatched beauty of country life. Click here for more.

2 thoughts on “Shreddings of the Heart: Who Was V. C. Andrews?”