Now in its 35th season, the popular game show “Jeopardy!” definitely has an appeal that some other game shows — Wheel of Fortune, for instance — don’t. That’s because it’s all about knowing stuff: Shakespeare, science, sports, American history, potpourri, and lots more.

If you’re a librarian, especially a reference librarian, you may have heard someone say, “I bet you’re good at ‘Jeopardy!’” once or twice in your career. The two librarians at my house stopped watching “Jeopardy!” a while back because it’s hard to eat dinner while screaming answers in the form of a question at the TV. The only way we could win would be as a team. I’d handle categories like World Leaders, while Fern would cover Show Tunes. We would just punt on Sports.

Many librarians love “Jeopardy!”, and since it’s on five nights a week, there have been 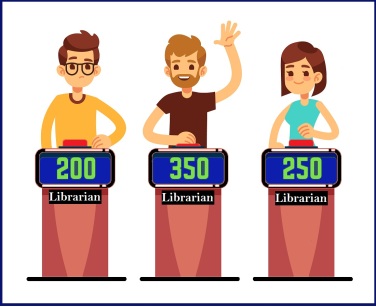 quite a few librarian contestants over the years. In 2017, American Libraries estimated around 150 had been on the show since 2005. The magazine interviewed 11 of them, including one with whom my sister went to high school.

The American Libraries article said that since 2005 there had been 30 librarian champions, and that librarian contestants had won close to a million dollars on the show. That was before the “Giant Killer,” Emma Boettcher, took down James Holzhauer back in June. She performed her heroic deed just as Holzhauer was about to eclipse Ken Jennings’ record winnings of a little over $2.5 million. So hopefully, Jennings sent her a nice thank you card, or maybe just a check. Librarians are so helpful!

Boettcher is a user experience librarian, a job title that I’m pretty sure didn’t exist back when I was in library school. She majored in English as an undergraduate, so Shakespeare and other categories like Literature and Theater were right up her alley. Oh, and also she wrote a paper about “Jeopardy!” while in grad school, “using text mining to find out whether the readability of the show’s questions could predict their difficulty levels.” Duh!

Is it hard to get on the show? Boettcher first tried out when she was still in high school but didn’t get chosen. Nevertheless, she persisted, and it finally paid off, to the tune of just under $100,000 this year. She’ll be on a “special “Tournament of Champions” show in the first half of November along with Holzhauer and some other smarties so stay tuned. 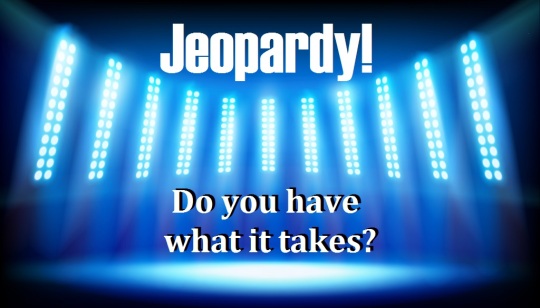 Would you like to be a “Jeopardy!” contestant? Start here by registering, then use the online materials, including practice tests, along with your own smarts and study up.

May the best librarian crush! 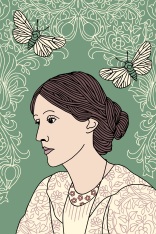 “Lies will flow from my lips, but there may perhaps be some truth mixed up with them; it is for you to seek out this truth and to decide whether any part of it is worth keeping.”

—Virginia Woolf, “A Room of One’s Own”

I’m a bit embarrassed, but I need to admit up front that I’ve never read anything by Virginia Woolf. Why embarrassing, you ask? First, because I’m writing this article about her. Second, because I was an English major in college and she was a prominent literary figure in the Bloomsbury set—as well as an atheist, feminist, and pacifist. One would think she would be a legitimate part of an English major’s education. What happened that kept me from getting acquainted with her? Maybe I skipped a course on early twentieth century writers, or perhaps my college didn’t give sufficient attention to female authors. Now, let’s look at the fact that most colleges in that time period, the early 1970s, failed to highlight most women authors. No, let’s not—that’s an entirely different article. Whatever the cause of my lack of familiarity with Woolf, I regret that I did not come to know her in my education. Thankfully, I discovered her through my career as a public librarian.

Right now, you may have thoughts and questions bubbling up in your mind.

“When did she live?” 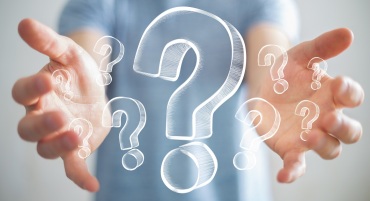 “She killed herself, right?”

“She lived in a lighthouse, didn’t she?””

“I heard she was anti-Semitic.”

“She was a lesbian.”

“Wait—don’t tell me. Wasn’t she in that film “Who’s Afraid of Virginia Woolf?”

“Someone told me that her first name was not Virginia. Is that true?”

Or perhaps even: “Why is this guy writing an article about her?”

Whoa! Stop right there, please. All will be revealed. Be patient and I will correct some misconceptions and tell you, if not everything, then at least a lot of interesting things about Virginia Woolf.

First of all, as some of you are presuming, she is, in fact, deceased. She was born in London, England, in 1882, to a wealthy intellectual family. Woolf died in 1941 in the depths of the River Ouse, near her home in Sussex. Suffering from yet another lengthy period of debilitating depression, she had waded into the river, her pockets filled with heavy stones so that she would sink and drown. She had tried to take her own life, unsuccessfully, a few times earlier in her life, but this attempt proved successful.

An odd word to use in describing suicide: successful. Was her life successful, or was it her death that succeeded? What makes a life a success? By the standards of her time, she was wildly successful in that she married well, was exceedingly well-read and educated, and was a published author of fiction, nonfiction, essays, plays, and short stories. In addition, she was the central figure in a prominent artistic and literary group called The Bloomsbury Group. Money was always easily available to her, and so her life wasn’t burdened by the manual labor that most women endured in England in this time period. 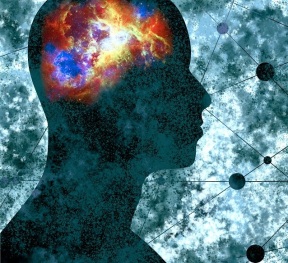 Nothing stood in her way to work creatively regarding her thoughts, opinions, insights, writings, and associations with people. Nothing except her psyche. Her failing was not one of those usual ones of ability, time, or space, but rather was hidden in the inner reaches of her highly intelligent mind. She inherited a family curse—mental health issues that many of her relatives experienced. Hers was a fragile mind, prone to exhaustion and depression and shaken by the family dynamics of her early years, including being sexually molested by her two older half brothers, Gerald and George. All contributed significantly to what is clear today—she dealt with bipolar illness. She was vivid in her descriptions of how it manifested itself at times. One example is Woolf’s reflection on her mental state after completing her first novel “The Voyage Out.” “I married, and then my brains went up in a shower of fireworks. As an experience, madness is terrific… and not to be sniffed at, and in its lava I still find most of the things I write about. It shoots out of one, everything shaped, final, not in mere driblets as sanity does.”

Well, what about Woolf’s family? They were prominent and quite successful in turn-of-the-century London. Her father, Leslie Stephen, was a writer, historian, and biographer. He was the son-in-law, through his first marriage, of the novelist William Makepeace Thackeray. Julia Margaret Cameron, her cousin, was a well-known photographer. Her brother, Adrian Stephen, was a pioneering psychoanalyst and well-known pacifist. Her half-brother Gerald Duckworth (no relation to the author of this article) founded the publishing company Gerald Duckworth and Company. Her sister, Vanessa Bell, was a painter and interior designer. Chevalier Pierre Ambrose Antoine de L’Etang, her great-great grandfather, was from the French nobility and served first as a page to Marie Antoinette and later as stable master of the royal stables at Versailles. Her husband, Leonard Woolf, was a political theorist, author, and publisher. He founded Hogarth Press, which consisted of a small hand-operated printing press located in his and Virginia’s home, Hogarth House, at 34 Paradise Road in London. 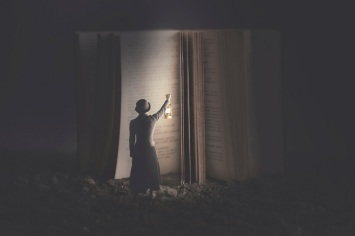 And so, what about Virginia herself?

So, what are the takeaways here?

Woolf was a professional reviewer, innovative essayist, novelist, publisher, biographer, and political organizer in the socialist and women’s movements. She seems to have known or met nearly everyone of importance in her day, including Sigmund Freud, with whom she and Leonard had tea shortly after Freud escaped Nazi Vienna for London. She spoke out against war and violence. Professor Jean Mills, author of “Virginia Woolf, Jane Ellen Harrison, and the Spirit of Modernist Classicism,” said: “Woolf’s comment ‘thinking is my fighting’ was an aphorism that we can usefully claim for ourselves today. Her essay ‘Three Guineas’ has been read as her attempt to grapple with the root causes of violence and war, and she articulates several conceptions of peace throughout her literary output.” 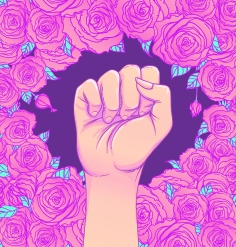 Woolf was not hesitant to break the mold of cultural expectations for proper women’s behavior. In “10 Things You (Probably) Didn’t Know About Virginia Woolf,” the British literary biographer Lyndall Gordon wrote, “In the 19th century nice women were quiet. Virginia Woolf said that she and her sister were taught the ‘tea-table’ manner. This was designed to keep polite, self-effacing conversation flowing. The most vital fact in her life was the contrast between this stifling of utterance, this concealment in ‘shadow’ and the ground shaking under her like an earthquake when she brought out her full-throated ‘Outsider’ voice, protesting against military or domestic violence in favour of nurture, listening and sympathy, values which the civilized of both sexes already share. The voice of her Outsider prepares the way for the present voice of the #MeToo generation.”

In the midst of Woolf’s articulate contributions to literary, cultural, political, and social circles, there was an intermittent and turbulent wrestling with an unknown force within her psyche. She was unable to elude it. In a suicide note she left to her husband, Leonard Woolf, she wrote, “I feel certain that I am going mad again. I feel we can’t go through another of these terrible times. And I shan’t recover this time. I begin to hear voices and I can’t concentrate. So I am doing what seems the best thing to do.”

If a person were to take away only one reason to celebrate Woolf, it would be my assertion that she was not just an important author, but a feminist icon. How so? She gave two lectures at the University of Cambridge’s women’s colleges in 1928 and developed them into the famous essay “A Room of One’s Own,” which was published the following year. As Wikipedia states, it was “an important feminist text… noted in its argument for both a literal and figurative space for women writers within a literary tradition dominated by men.” Her voice, along with those of other women writers before and after, has helped to open up publishing to women. And, it has helped put more women’s book on our library shelves and important voices in the spotlight.

Nothing brings a smile to Paul Duckworth’s face quite like a good book, a long walk, and the unmatched beauty of country life. Click here for more.