I have been a library user my whole life. My mom took us to the library every week, and kept perfect track of all of the books we borrowed. We were never late. I won’t say we were afraid of the local librarians, but we certainly understood that the library was a great service and that we should cooperate fully with the rules. However, the rules were not always easy for those with limited resources, like families with unreliable transportation or personal issues. Also, to use a watered-down cliché, THINGS HAPPEN. Maybe you left a book in a hotel or a taxi, and were unable to confess at the library. Would this go on your permanent record? Will this prevent you from ever visiting the library again?

Take a look at this map from the Urban Libraries Council. It shows a strong national movement for the elimination of library fines. While some libraries see the fines as a revenue stream, in many cases the fine money just goes back into the city or county general fund and does not directly benefit the library. This study from Library Journal, perhaps the most scientific one available, notes that only 15% of fines collected nationally by public libraries is spent on library materials. A little more unscientifically, you may take into account that libraries incur labor costs when they track and collect fines, and that some libraries even pay collection agencies to collect fines.

According to one perspective, fines are a useful way to teach and promote personal responsibility, while others feel that it’s more important to encourage reading and forego the morality. You can read more about the debate here. 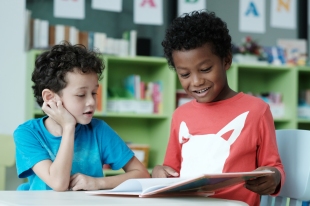 Some library systems have been reluctant to completely eliminate fines, choosing other creative ways to approach the issue. A different option is to eliminate fines only for youth, since fines often keep parents from allowing their children to use libraries. Libraries hope to increase access to reading and other library services to those who need them most. Not to worry—most libraries still expect books to be returned before more can be checked out.

Here are two more examples of libraries that are eliminating fees for younger patrons:

It may be too soon to determine how this issue will play out, but here’s an early result. According to news reports, the Chicago Public Library, one of the largest library systems in the country, has seen a 240% increase in book returns since the implementation of a fine-free policy. The new policy has also improved public perception of the library system and attracted new users.

Your library system may not be ready to make this move, but it’s certainly something worth thinking about.

For more on the magic we librarians create, here’s an interesting article on the role of librarians.

Fern has worked for Brodart as a Collection Development Librarian since 1990. She also did a stint as a reference librarian in the CNN newsroom and is married to a newspaper librarian. Click here for more.