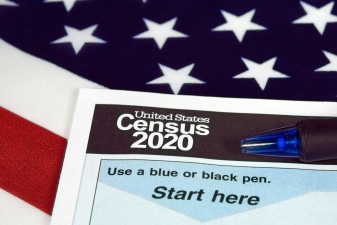 Planning for the 2020 Census has been going on for years, but you could say that our latest national headcount officially began on January 21, 2020. That’s when Lizzie Chimiugak Nenguryarr became the first person counted for the 2020 census. Nenguryarr, 90, lives in Toksook Bay, Alaska. She’s a member of the Nunakauyarmiut Tribe and speaks a language called Yup’ik. The Census counted about 600 folks that day based on the 2010 Census. You’ll have to wait a little longer for an exact count.

For the rest of us, the Census begins in earnest in March. In mid-March, about 95% of U.S. homes will receive a letter from the Census Bureau. The letter will encourage most

recipients to fill out the Census online. In some areas where Internet access is known to be less ubiquitous, recipients will still be encouraged to respond online but will also receive a paper questionnaire. They also have the option to answer Census questions over the phone. Occasional reminders will be mailed several times through the end of April. Eventually, doors will be knocked on to get as many responses as possible.

There are lots of good reasons for libraries and librarians to be involved with the Census and the ALA has done a good job of explaining them. But briefly, libraries can offer Internet access, help diverse groups find useful information about the Census in the appropriate languages, and help to make sure that respondents don’t get scammed.

OK, so are there any other reasons why libraries and librarians should be good helpers and citizens when it comes to the Census? Well, yes, there are more than a billion additional reasons—and all of them are green. It’s estimated that’s how much federal money will be doled out to states for libraries, based on Census findings: $1 billion.

That’s still a fraction of all the federal money that will be divvied up over time based on the Census count for all sorts of things.

So whether you’re urban or rural, rich or poor, new to this country or descended from Pilgrims, the Census is very important. And when the counting is finally complete, there will be data, data, data. Many people, businesses, and organizations will use this information to make all sorts of decisions, from where to build or expand schools, to where the next shiny new grocery store will pop out of the ground.

Are you ready for the Census?

ALA Libraries’ Guide to the Census